Gavin’s got his trainers on for the Calcutta Run!

Proud Supporters of BizWorld Ireland!Dragons’ Den is back with a bang for season 8!

For the third year in a row, Gavin Duffy will act as MC for the annual Calcutta Run in aid of the Peter McVerry Trust and street children in Calcutta, India. Runners of all levels will descend on Phoenix Park on Saturday, May 20th to take part and Gavin is thrilled to be involved once again.

“It really is a fantastic day out for people of all ages, families, children, you can even bring your dog! Last year, the run raised over €180,000 which was an amazing achievement for everyone involved and this year we are hoping to raise even more and have set a €200,000 target”.

In January of this year over 7,000 people were experiencing homelessness in Ireland, a record breaking high as the crisis continued to deepen. The Peter McVerry Trust provides a wide range of supports including homeless and housing services, drug treatment and detox services and with the funds it received from the Calcutta Run has been able to purchase and refurbish a building and provide its users with access to healthcare. Funds raised through the Calcutta Run will also go towards tackling homelessness in Calcutta, India where 250,000 street children live in abject poverty on a daily basis.

Gavin is hoping for another huge turnout this year “I will be waiting at the finish line to congratulate everyone on the day!”

Visit  http://www.calcuttarun.com/sign-up/ to sign up for the Calcutta Run 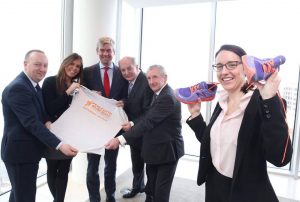